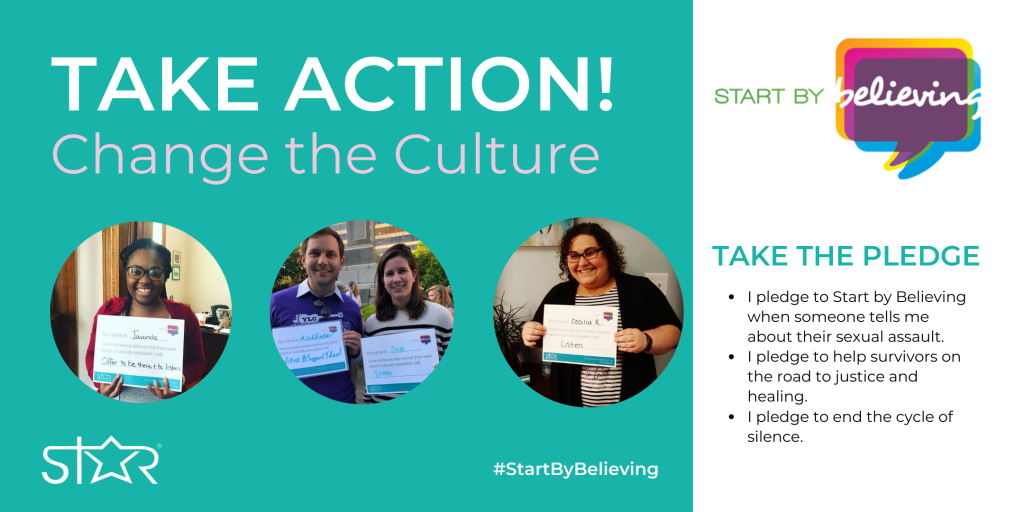 Start by Believing is a public awareness campaign designed to end the cycle of silence and change the way we respond to sexual assault. It was first launched in April 2011. Since then, thousands of people across the country have made their own personal commitment to believe and support survivors of sexual violence. There are many ways you can take action. Below is a list of ideas on how to get involved – but don’t stop there! Be creative and use what you know to spread the word.

Support survivors: When someone tells you they have been sexually violated, believe them and remind them that it was not their fault.

Speak up: Rape continues to be the most under-reported crime, with law enforcement estimating that only about 35% of rapes are reported each year. In addition, many people overestimate the percentage of sexual assault reports that are false. Research shows that about 2-8% of sexual assault reports to law enforcement are false, far less than many people realize. Challenge these myths when you hear them!

Take a stand: When you hear people blame a victim for their “role” in the sexual assault, remind them that we’ve all made choices that decrease our safety. It is not the choice of the victim that matters – it is the decision of someone else to commit a sexual assault.

Start a conversation: Social media allows you to carry the message farther and faster than ever before. Use your preferred platform to engage a conversation on what it means to #StartbyBelieving.

Make it visual: Take a selfie with your pledge and post it on social media. Start by making your own personal commitment to Start by Believing. Click here to download our pledge sign now.

Learn more at Start by Believing: Ending the Cycle of Silence in Sexual Assault. 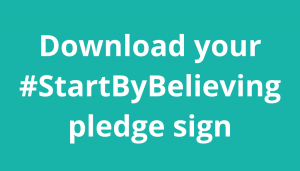